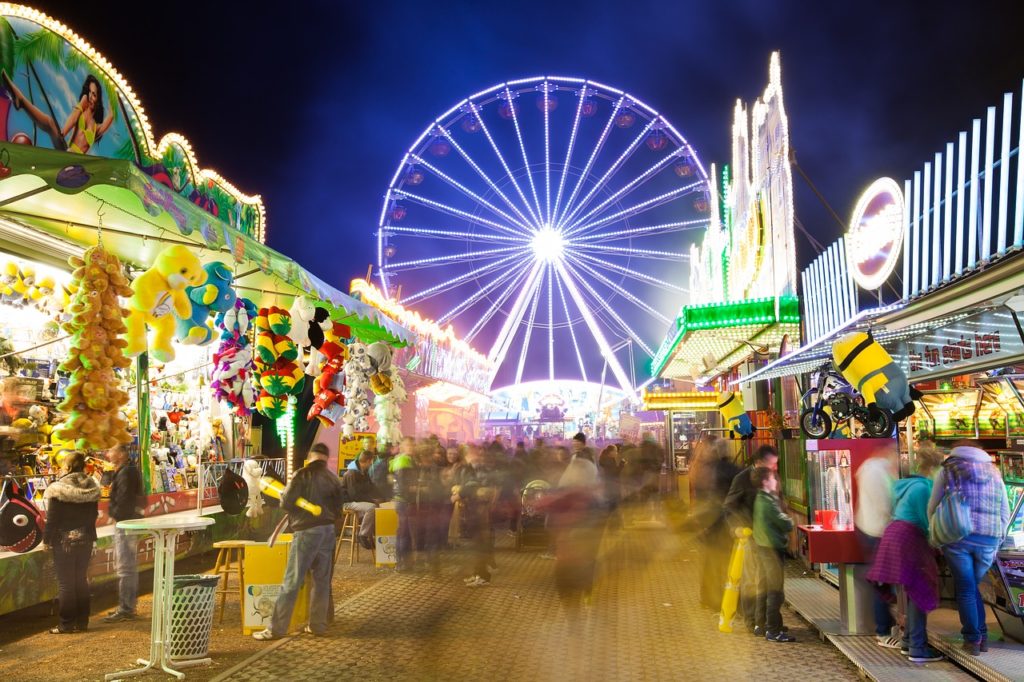 That moment you’re at the gym and the guy you’re speaking with says, “Let me guess your age.”

We were discussing politics so he wasn’t fishing for a female. I think it’s safe to say that a question like that ranks right up there with let me guess your weight.

You brace yourself. Not blood draining from your face, but laughing to yourself, thinking hmmmm… I’m ready because I could care less, unless He guessed me at 92 or something.

Thankfully, he didn’t guess my weight and was shooting 99% accuracy on age. I’m sure I would’ve been fine with him guessing me at least 5 yrs younger, c’mon throw me a bone at least.

It’s a good thing I don’t really care that much. The weight would’ve been another issue for me, but we all have our areas.

It led me to thinking about the carnival guys who want you to “pay them” to guess your weight and age.

Safe to say we all pretty much say no thank you but we enjoy watching the ones who have the courage to “step up”.

They have a way at laughing at themselves and don’t mind being “evaluated”.

I am definitely not this girl.

Perfectionists, or recovering ones, have a couple of commonalities.

Fear of rejection and the judgment of others keeps them bound.
Enslaved by the opinion of others and their acceptance.
Low-self worth and insecurity.

Fear of rejection and the judgment of others keeps them bound.

Acceptance is based upon their “do” and external things. Not their “who” which is based on their true identity in Christ.

I’m guessing the Carnival people who step up aren’t self-conscious or they’re mentally ready for it and want an honest evaluation.

By the way, have you ever really seen women line up for these at the fair? And want to spend money for someone to “evaluate” them? Rarely do women “sign up” for this. It’s almost laughable.

Yet the truth is girls, we are all evaluated every day. Such is life. People have opinions and it’s human nature to judge.

Can You See Yourself?

Many times we can’t see how we really are accurately. It takes someone “evaluating” us with constructive criticism to grow up in certain areas. Our self awareness can be really tainted by pride and the fear of what someone thinks or the reality of whatever it is we face.

It takes humility and confidence to let others evaluate you and speak into your life. Looking at the fruit of our decisions from major to minor and realizing there is hope. Hope no matter what the reality is. Being able to laugh at yourself and let yourself off the hook can only come from being secure in Christ and being humble.

It takes humility and confidence to let others evaluate you and speak into your life.

Judging yourself can be a cruel taskmaster and most perfectionists judge themselves harder than God or anyone ever would.

Paul said, I don’t even judge myself.

That didn’t mean he didn’t judge himself soberly in matters of righteousness but it did mean He refused to be judge and jury and put himself on trial. If anyone had a reason to judge himself it was Paul.

He had been violently hurting the church and was murdering Christians. And then, He experienced a radical transformation and a salvation experience.

Don’t think for a second He didn’t battle these things I’m sure He did. I’m sure it was warfare and intense at times. Yet now, as a spiritual father said He didn’t even judge himself.

Aaagh… the fruit of freedom. Free from condemnation, from not doing enough, being good enough or any other of the ‘enough’s’ we could think of.

It takes grace to fail well.

When we receive grace we are empowered realizing His strength indeed is made perfect through our weaknesses. Our shortcomings and whatever area doesn’t seem like it is enough will be strong enough as we depend on Him. This requires walking with a limp in dependence.

Leaning is a sign of confidence and strength not weakness.

Confidence comes and perfection dissipates when the revelation that all judgement was taken away in Christ. When you realize He is your biggest cheerleader not your highest critic. Go on and just fire that committee in your head.

Confidence comes and perfection dissipates when the revelation that all judgement was taken away in Christ.

Trying and striving in our own effort and strength, is taken away in Christ.

Low self worth and insecurity, taken away in Christ and gently replaced with confidence in him. He evaluates us through his love, the son who has redeemed us from every lawless deed and delivers us out of darkness into the kingdom of his son. The picture of you looks more and more like him as you focus on His picture and image.

What if you walked leaning?

What would that look like? What if you were stripped a self confidence and had supreme confidence?

This security can only come from being securely established on who he says you are and that you’re worth and value that come from him. Once that’s established we are then packed lighter for the journey and have a lot more laughter.

Leave me a comment and let me know what you think.