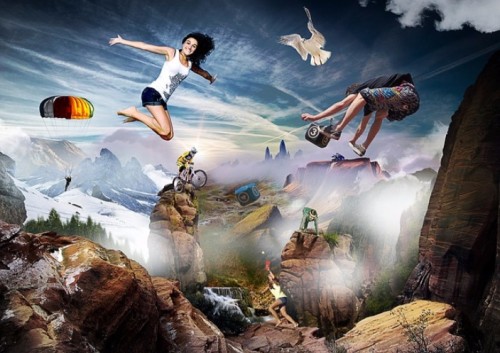 Awww yes, there is nothing quite like that cup of joe in the morning. There are those among us who prefer Red Bull, Rockstar or a Pepsi.

Oh how we like to be loaded and ready for our day. It just makes me feel like I am saying…

Unfortunately, I have discovered that I need to be a little less than loaded since my natural energy and somewhat changing hormones collided a few years back. Yes, it was a sad day when I discovered I must go to decaf, I mean is that even classified as real coffee?

I decided for the best interest of my family members that this indeed was a necessary choice.  The “ I am woman hear me roar” was not going over well.  Neither was my jumpiness and near full fledged panic attacks from traffic in Nashville.  I decided reluctantly to go cold turkey.   No one prepared me for the headaches or the fact that I would no longer be able to leap tall buildings in a single bound.  Now, I was just me.  Plain old me.

Thankfully I have decent natural energy but I like that coffee buzz that sharpens my brain. The good news is,  I’m a really fast talker so no one hardly noticed. Truth be known they may have even been a little relieved, it is tough keeping up with a fast talker.

What you ask does this have to do with Adrenalin Junkies?

Caffeine simulates the feeling of “let’s do this”.  We love that feeling of the rush we get from doing something daring.  We even feed off of the adrenalin from other adrenalin junkies. We admire the evil kneviel’s and the guy who will walk across the tightrope in New York City.

We choose suspenseful movies that keep us glued on the edge of our seats. Some even pay others to scare them in a haunted house. I don’t like being scared so I’m out on that one.

My nephews love to show me videos of bridges they swing from and bungee jumping they have survived. Why? Because they’re adrenalin junkies. The thrill they get from doing something yet dangerous and exciting makes them feel accomplished and somewhat invincible. Kinda the way I feel when I drink caffeine.

I knew a guy that worked for Redbull and his job was to skydive while holding a redbull sign advertising for the product.  Was I gonna skydive?  Never, but I was fine living off the other guy’s adrenalin.  He was living his dream, getting paid for doing something he loved and getting an adrenaline rush.  He had his thing and adrenaline fix and I had mine.  They were vastly different but accomplished the same goal. Others benefit from you just doing your thing.

Whatever you do, do it with your whole
heart and be fully satisfied doing it.

If you think about it, there really is no other way to live. Whatever you do, do it with your whole heart and be fully satisfied doing it. I often tell young people to pick a career that even if they didn’t get paid for it they would still do it. They would then be tapping into their passion and many times their purpose.

I just don’t think God calls us to something that our hearts are disconnected from.  I mean not every aspect of it will be glorious but over all when we are doing that thing He has called us to do we get a rush and thrill doing it! It fulfills something in us and ultimately touches others with our purpose and gift that God has given us.

So be an adrenalin junkie in your field of whatever it is that you feel called to do. Others will be watching and will be blessed as you do your thing whatever that may be. Don’t let others judge you or be concerned with what they think about what it is you do. That is between you and God. Now, go do your happy dance and carry on to your next adventure.

Please comment below on this article and let me know what you think.