Can we get a do-over? Five second rule? God made the dirt it won’t hurt kind of situation.

He thought He was doing it the right way but turns out he wasn’t. He was learning. Anything you do, even if you fail, can help if you fail forward.

Moses was quite independent and was used to depending on himself. But He would never be the deliverer or leader God wanted him to be depending on his street smarts or his own strength or wisdom.

He kind of had to let go of the motto, if it’s gonna be it’s up to me. This wasn’t the strategy God wanted him to use. He wanted him to walk leaning.

Dependent. Depending on the flesh wasn’t gonna be the best executive decision, however, it is much easier to direct a moving ship.

If you’re walking in the right direction don’t get caught up in perfection. My husband says this to me on a regular basis.

When you choose to carry out God’s plan, then you are more apt to hold your own feet to the fire when you get off course.

You don’t need a drill sergeant coming behind you as a task master. You are self motivated because false starts have a way of making you figure out where the failure happened and regroup. Re assess and re start.

You don’t need a drill sergeant coming behind you as a task master. You are self motivated because false starts have a way of making you figure out where the failure happened and regroup. Re assess and re start.
Click To Tweet

3 things that will help you avoid multiple false starts.

Consistency wins over doing it perfect.

Get up- Even when you’re knocked down. Being knocked down just points to the fact that you showed up and risked an attempt to do something.

Why? Because leaders give directions. They don’t always have the answers but they do have direction. They’re also open to suggestions and looking for wisdom from their team.

Flop forward if you need to, but just don’t quit. Quitting is for people who aren’t acknowledging what they have to bring to the table.

Philemon 1:6-that the sharing of your faith may become effective by the acknowledgement of every good thing which is in you in Christ Jesus.

When we deny what we have to offer it can come across as humble but actually it is a false humility. Acknowledging and offering what God has deposited within you is saying yes to God.

When we deny what we have to offer it can come across as humble but actually it is a false humility. Acknowledging and offering what God has deposited within you is saying yes to God.
Click To Tweet

Choosing to share what he has given you to help others is faith in action. If we don’t do something with our faith it is null and void producing no fruit.

Putting those things into action is what makes your faith active and alive.

Making mistakes is part of the learning curve and fleshing it out. This is what Moses did, He made some mistakes but he would learn to get it right next time. He tried to accomplish in the flesh what only could be done in the spirit.

Frustration always comes when we move in the strength of our flesh instead of relying on the power of the spirit. When we rest in God and rely on him we are always in a position to experience the best from God. Rest prepares you for the best.

Frustration always comes when we move in the strength of our flesh instead of relying on the power of the spirit.
Click To Tweet

Let’s highlight a couple of people who could have used their back story as a reason and excuse to quit with a false start. They didn’t. They just started with what they had been given.

I watched an interview with the actress Julianne Moore. She started her acting career in 1985. She went on first starring in a soap opera and then progressed. She won Academy Awards and the Grammy’s.

Backstory is, she went to 9 different schools because her dad was in the military and she moved around a lot.

She constantly had to reinvent herself and discovered that she could in each new situation. Her difficulty became her avenue.

She didn’t whine about it. She used it to her advantage. She actually realized she shined at the change of location.

So, she decided to try acting. Reinventing herself in attending 9 different schools was the catalyst to help her act.

During an interview, the interviewer mentioned that she started acting later in life and she said, I can’t imagine doing anything else, this is what I love. She never used her past as an excuse. She just played the hand she was dealt and made it work to her advantage.

Adopted by her grandparents because of her Mother and Father’s addiction. She shined. She humbly, confidently struts onto the mat as one of the most accomplished gymnasts in the world.

It may have looked like from her beginning she was gonna have a lot of false starts because of what she came through, but she got the last word. On the balance beam. On the floor. She is now, the most decorated gymnast of all time.

Her love and passion as a gymnast pushed her. With fierce determination she practiced for hours a day. She wasn’t concerned with the outcome as much as she was with putting her time in.

Doing the practice. 32 hours a week. Everyday. Day in and Day out. The discipline would wield great returns as she trained.

Preparation time is never wasted time. What you commit to is seen in what you submit too.

Preparation time is never wasted time. What you commit to is seen in what you submit too.
Click To Tweet

And a world watching Simone Biles would be amazed. All because, she put her time in. Her due diligence and grit would pay off.

Does she have skills? Most definitely, a resounding yes, but she just kept showing up. Over and over again.

Not leaving room for failure and false starts defining her future. Did she fail some? Sure, but it didn’t define her. She kept practicing her skills. Polishing her efforts, studying where she needed to improve.

She shined in the Olympics as she took the Gold for the US.

When Sexual allegations surfaced about the Olympics team doctor she stood with her face like a flint with her teammates.

She confronted what the organization swept under the rug and covered up. She warred on every level and won.

Simone Biles is an example of someone who got a false start in life but she chose herself. She chose to develop her talents and risked failing in order to learn what it would take to succeed.

I’m sure she had no idea it would take her to the level she got to but she just kept at it. Not feeling sorry for herself but humbly moving ahead choosing herself and focusing on the dream.

She kept practicing her skills when she didn’t feel like developing and practicing. Brushing off the false starts by starting again. And again.

What is it you are being prompted to start? Have you quit because of a false start?

Are you choosing you and not apologizing for it?

Persevering is underrated. Will you persevere?

What if your story of overcoming false starts gave someone the nudge they needed. No one knows the things you had to overcome to get where you are.

It was tough. It cost you, but what if it meant hope for someone else. 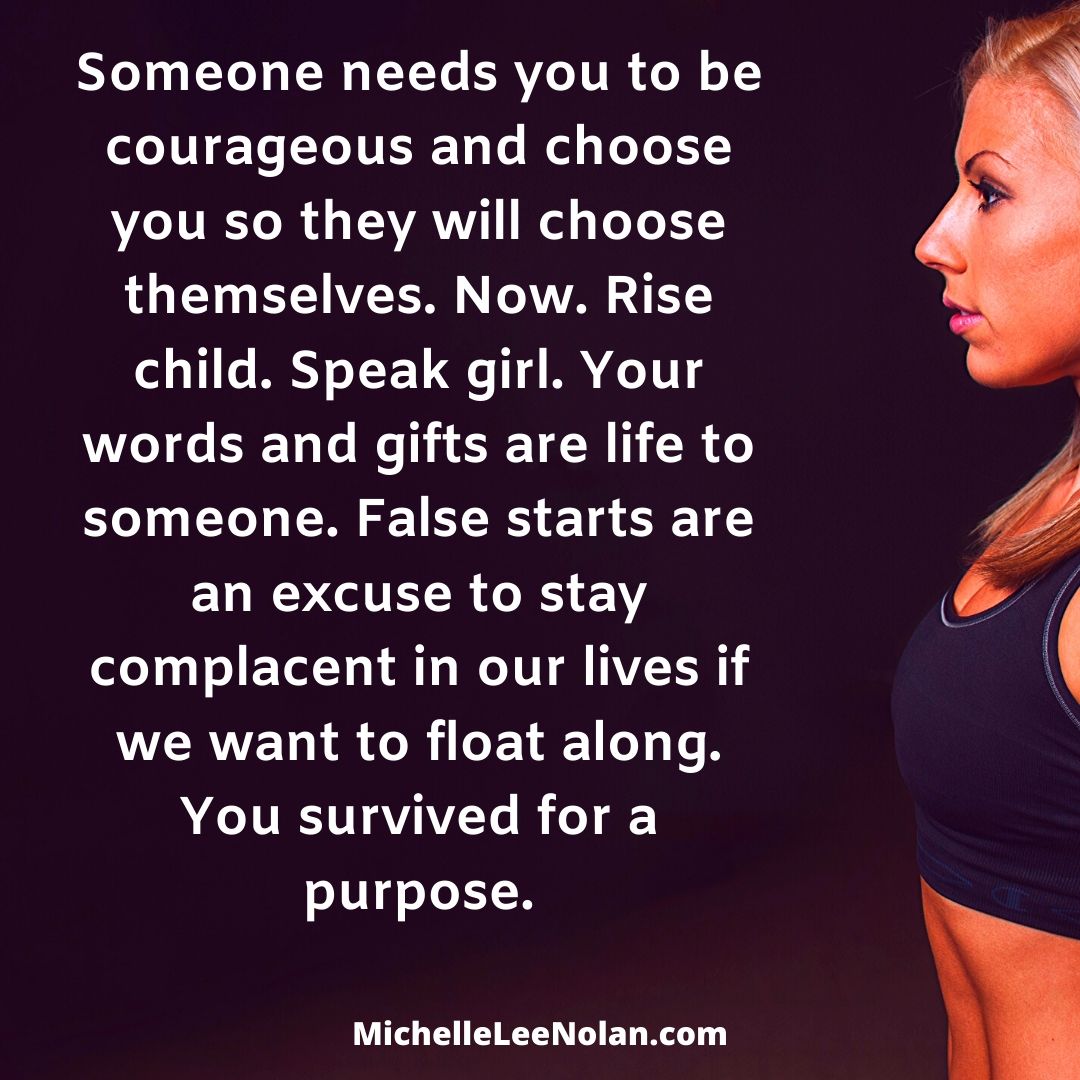 What if making it through your trials gives someone else the hope to stand. To rise. To shut down the lies of the enemy. To help others move out of the darkness into the light.

What if making it through your trials gives someone else the hope to stand. To rise. To shut down the lies of the enemy. To help others move out of the darkness into the light.
Click To Tweet

We don’t like to think of not choosing ourselves as something selfish, but what if it is? What if staying in our small little world, staying confined behind our doors is a cowardly act. The easy road.

Someone needs you to be courageous and choose you so they will choose themselves. Now. Rise child. Speak girl. Your words and gifts are life to someone. False starts are an excuse to stay complacent in our lives if we want to float along. You survived for a purpose.

Someone needs you to be courageous and choose you so they will choose themselves. Rise child. Speak girl. Your words and gifts are life to someone. We must stretch into our future. We must reach for others. We must rise together.
Click To Tweet

Choose yourself by overcoming false starts.